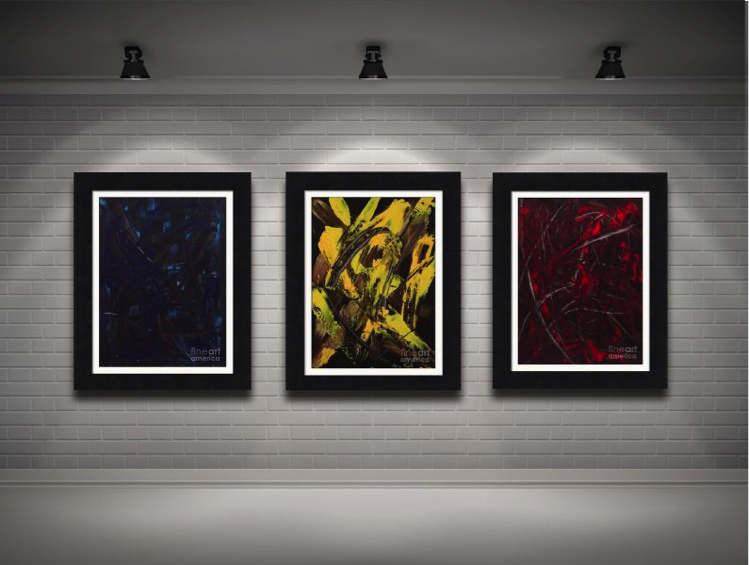 For me, abstract painting is the synergy between emotion and color. It’s how I express my feelings, thoughts, and experiences. I use color to explore mood and intensity and I use paint brushes and tools to convey the rhythm and flow of emotions. The process allows me to recreate and work through a dream or experience, turn it into a work of art and then release it.

Most of the time, a single canvas is enough to fill and contain the moment I want to express. However there are times when one panel isn’t enough. This happens either when there are multiple images that relay a single idea or like a story, I need to paint the experience from beginning to middle to end. Sometimes the panels are planned, other times they arise organically. For those pieces, I incorporate diptych and triptychs into my work. A diptych is a work in two panels and a triptych is a work in three. (Artists can also use other polyptychs such as four panels called quadraptychs, five paneled pentaptychs and more…)

(For a great explanation and history of diptychs and triptychs visit https://www.liveabout.com/what-is-a-diptych-1123051)

The first triptych I painted was part of my Transitions Series. I began the series after my father died. I was struggling to understand and come to terms with our relationship so I began to explore my expectations of him, as well as the expectations I carried into other relationships. From that exploration came my triptych – Expectations.

Expectations (Blue), Expectations (Yellow) and Expectations (Red) represent three major relationships in my life. The paintings each express the anger and confusion I felt and associated with each individual and also the moments of light and clarity. The paintings feel chaotic and intense because the essence of the relationships were chaotic and intense. Although it is difficult to see from the photograph, for the final or top layer of each painting I added interference paint. Interference paint plays with the way the light waves reflect off the paintings and adds a certain ethereal quality to them. (The effect was originally created by using ground fish scales and mixing it with paint.Today, the paint comes premixed with synthetic materials that mimic the iridescent quality in fish scales. No fish were injured in the creation of my paintings.)

This next triptych was inspired by a childhood memory of my Grandmother. It was one of those deeply buried memories that arose one morning as the sunlight filtered through the curtains and into my kitchen. The first painting in the series is dark because the memory was dark. In the beginning I could only see parts of it. I used red to represent the bold, disturbing images that arose. As I began to process my childhood experience, more images surfaced so the darkness transitioned into blue and the red expanded as more of the memory emerged. In the final panel, I had worked through the experience and released it.

Family drama is at the heart of most of my multi-panelled pieces. Early in my work and with the death of my father, my family became an abundant source of pain, anger and inspiration. During the time I was working on the Soft Series, I was going through another difficult time with them. As a result, the diptych Soft Red and Soft Red Light was created. As I struggled through those difficult moments and longed for peace and clarity, I consciously chose to let light into my life and make my own way without their assistance or presence. I let my feelings of anger, confusion and love guide me and I turned something hurtful and unpleasant into a work of art.

The color inspiration for this diptych came from a photograph I took of a deep
burgundy & pink succulent. To it I added a black grape color and white.

The next diptych shown is from a happier time and one I painted as a wedding gift for my friend and her soon to be husband. For me, each canvas represented a spiritual being and the pair of paintings complemented each other like the two people. I used green for prosperity and purple for the creative and spiritual sides of their personalities. The “Barney” purple (her words not mine) was layered with the interference paint to make the light dance and accentuate the brush strokes. The movements are complimentary and reflected a busy couple and their future family.

This final triptych is based on a dream. It was one of those vivid, surreal dreams that is difficult to forget or find words to describe. The main element of the dream involved a messenger and his message was “Su Gaia”. At the time, I had never heard of the term so I had to look up the meaning. I learned that Gaia was an ancient Greek Goddess and the personification of the earth. From there, the idea for this triptych began.

Su Gaia translates to “Your Earth”. I created these painting using the radiation technique.

Diptychs and triptychs (as well as other polytychs) are multi-panelled works of art that artists employ to express a memory, experience or story. Sometimes the process is purposeful and other times it arises organically. The inspiration for the work comes from the desire or need to express a multifaceted experience from beginning to end. Sometimes the experience is pleasant and other times it is not. The point of the process is to use the feelings and turn them into a tangible, meaningful work of art. As the emotion or dream emerges, it is reflected upon and then painted. In the end, it becomes a link to my past that exists outside of me rather than a recurring emotion or memory consuming me from the inside.

Most of the paintings in this blog are available for sale as either an original or as a print.